The album is produced by Paul Moak (Mat Kearney, Lovedrug) and mixed by J.R. McNeely.

The band will start a tour this month with Relient K, Hellogoodbye and William Beckett (former lead is singer of The Academy Is).

NEW TOUR FOR OWL CITY – Owl City is excited to announce a world tour this fall in support of his new full-length studio album, The Midsummer Station – out Aug. 21 on Universal Republic. The tour, which kicks off on Sept. 5th at Nashville’s Cannery Ballroom, begins just two weeks after the album release and will hit major cities across the U.S. and Canada, including Newport Music Hall in Columbus on Sept. 16, before the North American leg concludes on Oct. 7 at The Crofoot in Detroit, Mich. Afterwards, Young will take off to France and make his way from Europe to Asia and finally wrap up the 45 date tour in New Zealand on Nov. 3.

The announcement of Owl City’s The Midsummer Station World Tour comes on the heels of a massive first week for “Good Time” – the debut single off Young’s forthcoming album that features a duet with “Call Me Maybe” pop sensation Carly Rae Jepsen. The song was added by more than 100 radio stations and sold 140,000 copies in the first week earning “Good Time” a #18 debut on the Billboard Hot 100.

NEW VIDEO FROM JSON – Lamp Mode Recordings has released Json’s new music video for the single, “Brand New,” from the album Growing Pains, which debuted at No. 4 on the iTunes Hip-Hop Chart when it released in February. One of this year’s most anticipated Christian hip-hop releases, Growing Pains features collaborations with Lecrae, Mikeschair, Benjah, Jai and more.

“‘Brand New’ is a hype song about what it means for the believer to be made new in the image of Christ,” explains Json. “Brand New is one of those songs that just makes you wanna move. The video simply adds to that feeling. If you’ve been made brand new, then this should be your anthem.”

Here is the music video.

House of Heroes will premiere lyric videos for each song from its new album “Cold Hard Want” through July 6 at select sites for 24 hours only, a daily tweet from @coldhardwant will reveal the link to the site with the exclusive each day. Follow House of Heroes at http://twitter.com/#!/coldhardwant.

The album is slated to release July 10.

SCHLITT HITS CHARTS – John Schlitt has hit the Billboard and Christian Music Weekly (CMW) music charts with “Hope That Saves The World,” the lead single from The Greater Cause, the legendary vocalist’s fourth solo CD.

The single, co-written by Schlitt and his producer, Dan Needham, landed in the No. 29 spot on Billboard’s Christian Rock chart and No. 25 on CMW’s Rock chart.

“With the new chart positions, it’s clear that people all over the world are responding to the dynamic combination of the timeless message of ‘Hope That Saves The World,’ John Schlitt’s amazing voice and the power of God!” says Jeff McLaughlin, president, A-Sides Radio Promotion.

Tags: Chris Pugh, Cold Heart Want, Hope That Saves The World, House of Heroes, John Schlitt, The Greater Cause, View From The Pugh

Song of the week: “Remember the Empire” by House of Heroes

Tags: Chris Pugh, House of Heroes, Remember the Empire, song of the week, View From The Pugh

Song of the week: “Comfort Trap” by House of Heroes

Song of the week: “Independence Day for a Petty Thief” by House of Heroes

Tags: Chris Pugh, House of Heroes, Independence Day for a Petty Thief, song of the week, View From The Pugh

Stephen Moore, a senior economics writer for the Wall Street Journal editorial page, will address the question “Can Capitalism Make a Comeback?” as part of the Major Issues Lecture Series presented by the Ashbrook Center at Ashland University.

The lecture will be held at noon April 4 in the Myers Convocation Center on the Ashland University campus. Tickets are available for $20 each or $160 for a table of eight. For reservations, call Lisa Ormiston at 877-289-5411

JAZZ ENSEMBLE CONCERT SLATED – The Malone University College of Theology, Arts, and Sciences – Department of Music will present a Jazz Ensemble concert on April 3 at 7:30 p.m. in the Memorial Chapel of the Johnson Center for Worship and the Fine Arts. The concert – under the direction of Tom Pylinski – follows.

Ashland to present “The Comedy of Errors”

The Ashland University Spectrum Series presents the final performance of its 2011-2012 season with The Acting Company, in association with the Guthrie Theatre, featuring its production of “The Comedy of Errors,” one of William Shakespeare’s most delightful comedies, on Wednesday, March 14, at 7:30 p.m., in Hugo Young Theatre.

For its 39th annual tour, The Acting Company started performances in January at the Guthrie in Minneapolis and is traveling to 31 communities in 21 states plus Ontario, Canada.

Shakespeare sets all this action in one day and features a recurring theme across his work: blending tragic situations with comedic resolutions and introducing farce to wide appeal. This play is the springboard of Shakespeare’s fascination of identity—the story of two sets of identical twins tragically separated at birth involves a series of wild mishaps based on mistaken identity leading to wrongful attacks, a near seduction, an arrest and accusations of infidelity, theft, madness and demonic possession.

NEW MUSICAL IN SUGARCREEK – “The Confession” musical will be at Carlisle Inn in Sugarcreek 7 p.m. July 19.

You can buy tickets here. 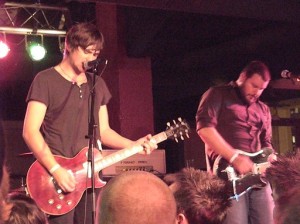 The show was only announced a week before and promoted locally, which explained the crowd of about 75, but the band’s performance was impressive.

“It’s a pleasure to be back to lovely Columbus, Ohio,” lead singer Tim Skipper said. “We just finished our new album, but these songs are too good not to be played right away.”

Bottom line, if you like the band’s previous releases “The End is Not the End” and “Suburbia,” you’ll really like “Cold Heart Want.”

“Out of My Way,” “Remember The Empire,” “Stay,” “Suspect” and “The Comfort Trap,” “Dance or Blow it All Away,” were all received well by the crowd. In addition, the band mixed in past hits “Elevator,” “God Save The Foolish Kings,” “So Far Away,” “Serial Sleepers,” “Field of Daggers, “Lose Control,” “Independence Day,” “Code Name: Raven” and “In the Valley of the Dying Sun.”

“Independence Day” was played after Skipper took a request from the audience.

“We haven’t put together a set list in two to three years,” Skipper said.

The opening acts were far from bad, but attendees were mostly there to see House of Heroes.

Hip-hop group MattiBurns had an interesting stage presence, while Come Wind had an unique blend of ambient inde rock.

Song of the week: “God Save The Foolish Kings” by House of Heroes

Tags: Chris Pugh, Columbus, God Save the Foolish Kings, House of Heroes, song of the week, Stephanie Smith, Suburbia, View From The Pugh

Song of the week: “Burn Me Down” by House of Heroes

Tags: Burn Me Down, Chris Pugh, House of Heroes, song of the week, Suburbia, View From The Pugh